And the Award Goes to...

Protecting the health of San Francisco Bay is a team effort. That's why it's a special treat for us every spring to recognize Baykeeper’s Blue Rivet award winners. It's our opportunity to celebrate the community members who have stood by our side to fight for a healthier Bay. Just like the rivets of the Golden Gate Bridge, which join the iconic structure together to stand strong over the Bay’s waters, our Blue Rivet awardees are part of what makes us a stronger advocate for the Bay. Each year, the awards acknowledge some of the Bay's most committed partners, and this year's honorees are no exception:

Andrés Soto has been a key ally of Baykeeper's work for many years. Last February when Chevron's Richmond refinery spilled hundreds of gallons of oil into the Bay, Andrés was the first to alert us, which resulted in Baykeeper arriving first on the scene in time to capture critical drone imagery of the oil spreading in the water. As a Benicia resident, he also provided invaluable community assistance in our legal action this year to hold the Valero refinery and Port of Benicia responsible for dumping petroleum coke into the Bay. After serving for decades as a community organizer with our partner non-profit, Communities for a Better Environment, Andrés retired earlier this year. We'll miss working with him in his professional capacity—but we know Andrés will always report pollution and fight for the health of the Bay and the people of the Bay Area.

Richmond is one of the Bay Area communities most harmed by industrial pollution, so it’s no surprise that it would also be home to some of the region’s most courageous policy leaders when it comes to protecting the health and well-being of its residents. One of the most inspiring examples of what local government can accomplish took place last year when the Richmond city council voted to ban the handling of coal and petroleum coke within city limits. This new law was meant to protect both the water quality of the Bay and the air quality of Richmond neighborhoods next door to the coal export terminal.

The dirty fuel industry fought the law, but certain members of the Richmond city council held firm—and late last year, the city reached an agreement with the fossil fuel industry that not only kept the ban in place, but strengthened Bay protections until the dirty fuels are phased out entirely. We're hoping the bold example of Richmond's elected leaders will inspire other cities across the country to do the same. Baykeeper is proud to recognize some of the civic leaders who made it happen: Eduardo Martinez, Claudia Jimenez, and Gayle McLaughlin.

Finally, we honor our longtime partners at Obsidian Wine Company. The Bay couldn't ask for a more steadfast protector than vineyard co-owner Peter Molnar. Peter is Baykeeper's past board chair, and he currently leads our major donor engagement efforts. Together with his brother, Arpad Molnar, and partner Michael Terrien, Peter and the Obsidian team crafted a special wine to benefit Baykeeper, Rosé for the Bay, which has generated over $300,000 to protect the Bay since first being bottled in 2014. Peter and Michael are also open water swimmers and recently undertook an epic cross-Bay swim of nearly 40 miles from the vineyard in Napa to Aquatic Park in San Francisco (pictured, below), also a benefit for Baykeeper—raising over $12,000 to help defend the Bay. We are grateful to the entire crew at Obsidian for their dedication to keeping the Bay healthy and clean.

A big thanks goes to all of this year’s Blue Rivet awardees. They’ve made the job of looking out for the Bay much easier. You can read more about the awards and see past award recipients here. And thanks to all of you who stand by us and share our passion for protecting the Bay we love. Holding polluters accountable and making the Bay safer and healthier for everyone is an endeavor that takes all of us. 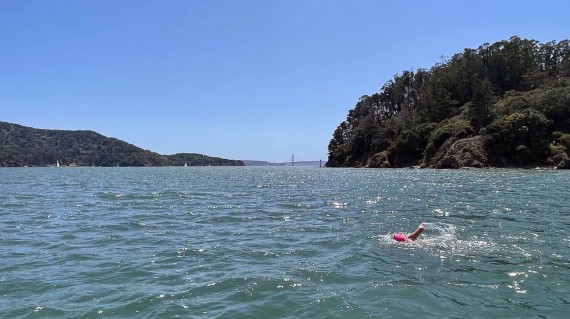